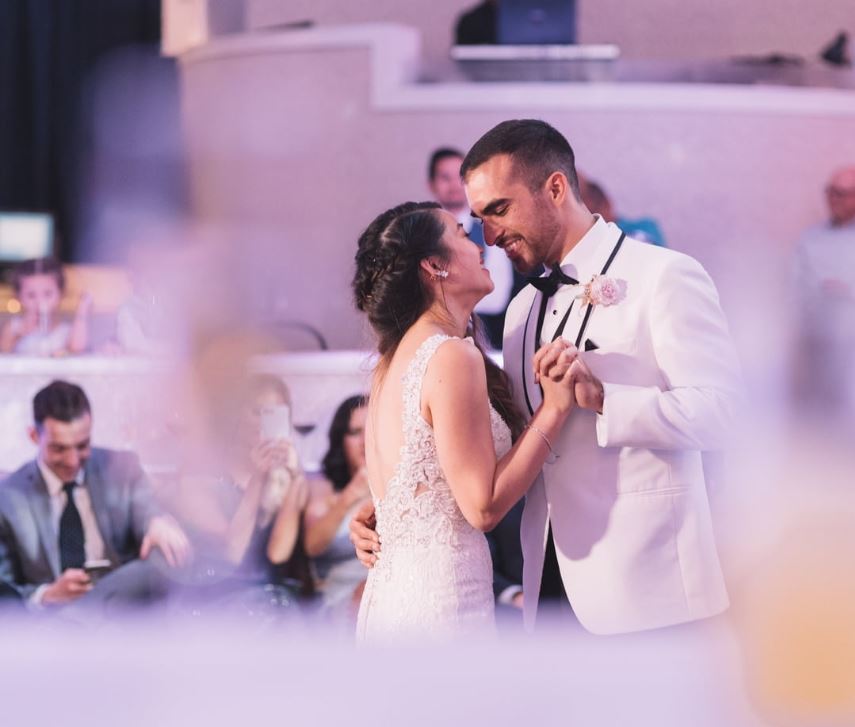 It was the day before Christmas Eve. Angel had shown Camille’s sister, Mica, the ring and said, “Once both families see it, I’m going to propose! When should I do it?” Mica was way too excited and said, “Tomorrow! Do it tomorrow!” The morning of Christmas Eve, Camille and her sister typically get ready, hang out, grab a coffee, and grab any last minute gifts or wrapping. They grabbed coffee, picked up a friend, and took a last minute trip to Target. Everything was seemingly normal and she knew Camille would never say no to Target. They get there and they begin to wander around the store. Camille begins to get frustrated because they were there for so long. Her sister already had everything in her hand that she said she needed but was still aimlessly wandering through every aisle while simultaneously on her phone. “I never at any point thought anything was up but was in such a bad mood because we had been there now for over an hour and I just wanted to kick my feet up and hang!”

They finally get home, and the garage is open. Camille’s first instinct is to get into the house through the garage. Mica said she didn’t want her friend to see how messy the garage was so they should go through the front door. The second that Camille walks through the door, she immediately notices the rose petals and tea candles making a pathway all the while her cousin is serenading me with one of my favorite Maroon 5 songs. She turned to her sister and she’s crying. It STILL hadn’t hit Camille. “The petals, candles, and serenading led me to the backyard. I take a peak and immediately see my childhood best friend, cousins, and sister-in-law standing right outside the gazebo. Underneath it I see my parents and Angel and it finally clicked. I immediately starting crying. I slowly made my way over while continuously asking Angel, ‘What are you doing in there? What’s happening?’ as I cried my eyes out with happy tears.” Camille recalled about the romantic setting created by Angel.

“Angel confirmed later that he shared some beautiful words about our lives together thus far (I couldn’t actually tell you because I was too busy crying)! In the middle of his speech, I interrupted so many times with variations of turning to my sister and saying, ‘Is this why you took so long at Target?’ then turning to Angel and saying, ‘I almost started a fire by kicking over one of the candles’ all said through a million tears. I finally let him finish and he got down on one knee and asked me to spend forever with him.”

The couple chose April 21, 2018, to get married because it was very close to their 6 year anniversary that fell on April 24th. When looking up venues, Camille and Angel searched everywhere! “With many of our guests being from out of town, we wanted to find somewhere on the Strip. My brother and sister-in-law suggested the Havana Room at the Tropicana. I was confused because when you think the Tropicana you tend to associate it more with being one of the older, less glamorous casinos. Nonetheless, it was the first venue we saw and we absolutely fell in love. The giant chandelier in the middle, the mini chandeliers on the side, the booths, the layout–we loved it all. We pretty much knew at that moment that it was ‘the one’ but continued through the rest of the day and saw 5 more venues. Each time we’d compare it to the Tropicana, and it just couldn’t be beaten.” states Camille.

The couple acknowledges that weddings can indeed get very pricey very fast! They had a set budget, and figured out must-haves, and progressed from there. According to Camille, “If Angel had to pick one thing that was money well spent, he said, ‘The wedding ring. At the time I didn’t have tons to my name, but seeing the look on your face when you first put it on and seeing it shine every day is just breathtaking and a constant reminder of the beauty that is you, my beauts. It is a daily reminder of the light and love that my wifey brings me every day.’”

“We loved all of our vendors! It’s so hard to highlight just one. Everyone from the flowers (The Palette) to the photo booth (Shutterbooth) were all amazing. In addition to the amazing Memory Lane, we were so happy we chose Eric Luis as our photographer. We actually went to college with him and he took the photos for my cheer and dance team and then went on to take my graduation photos and our engagement photos. Flying him and his cousin out was a no-brainer and the shots we were received confirmed that it was easily one of the best decisions we made! It felt more so like we had a really awesome friend/wedding guest who also happens to take really amazing photos. In picking another, it would be the XOXO Jamelle team hands down. I had most of the details set, but when their coordination team came in, they executed beautifully and made the wedding of our dreams come to life. We couldn’t have done it without them.”

When asked about finding Memory Lane Video, the answer was as simple as a quick google search, and the couple found MLV. “We found ourselves watching tons of their videos on their site, bringing tears to my eyes every. Single. Time. Their work truly speaks for itself.” Prior to Memory Lane, the couple looked at other companies and they didn’t compare with what Memory Lane Video has to offer. “With each video, Memory Lane consistently tells a beautiful love story that helps couples remember their wedding day for all the years to come. Whether to book a videographer or not was a question of ours. We talked to so many people that had gotten married and for those who didn’t book one, it was their one regret. For those that did, they were extremely happy with their decision. Simply put: video captures our story and all the love and emotion between us. It allows us to take a beautiful look back on the best day of our lives!”